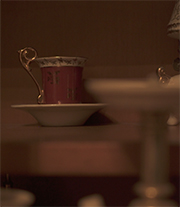 Like a whale-bone corset, like a world that never breathed.
Subdued beneath a fine veil of dust, the cabinet is a scene beyond its own appointment.
Perfectly still, the china lies unthought, delivered from carnality, and only monumental.
Only for the occasional glance does it perform:
A solemn play of light, an affected bow, a sequence of rehearsed images.
Formality reigns, setting a place for ideal forms that — having never arrived — are never considered gone.
This formality signs a contractual release for the hurried, irregular mass of living to go on.
The cabinet conserves the role of a drab paragon,
called to testify upon the release of a tension for perfection.