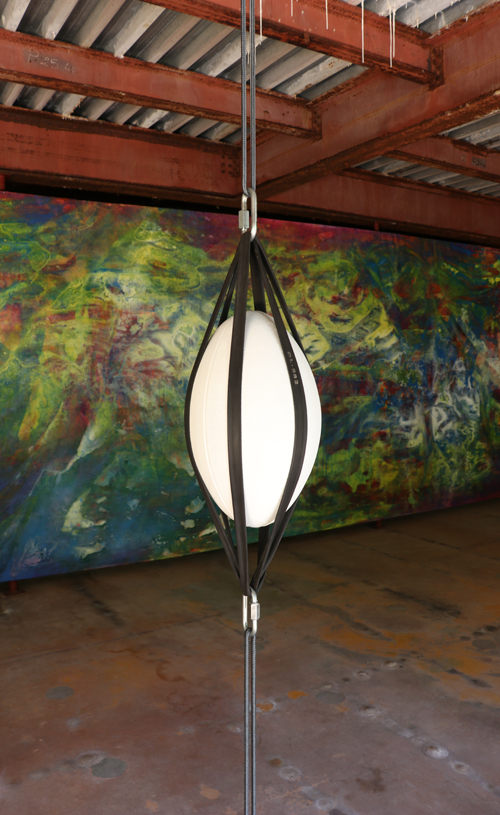 Set in an abandoned building on the Treignac site, Ursuppe draws on the rich valences of this former yarn factory. The exhibition channels the vibrancy of its accumulated histories, along with the influence of a future latent with departed workers, failed organisations and dispersed networks. Ursuppe is a primordial landscape teeming with possibilities and new struggles that emerge beneath the extinct landscape of failed western industry.

Birk Bjørlo’s engulfing painting spans the space in a free standing architectural leap of colour-coded layers that boil through each other. Here the presence of a photographic instant that permeates much contemporary thinking, is replaced by an idea of time and history that is not an accumulation of former ‘now’s, but is a still-active and potent sediment whose layers can become unruly and rupture into the present at any moment. The work has a trickster complicity with its seemingly open structures. Accident is invited to perform the work of revealing clues about the paintings material and temporal production; its collapsing instability is just perceptible in the periphery of its scenographic scale.

This underlining of the fragmented nature and agency of a painting’s histories sets up Lea Guldditte Hestelund’s installation of boxing and martial-art objects. They trace forward to the possibility of transformations to come. Lea’s work recalls the classical idea of the ideal form, but instead of presenting the self-improving obsessions of contemporary jogging or yoga cults, she evokes the body-transforming self-discipline of poor and dispossessed classes. When you finally have nothing you still have a body that can be disciplined and trained. Lea Guldditte Hestelund’s proposed martial bodily transformations are complicated by unexpected gender shifts and the threat of a simmering cathartic explosion.

Ursuppe is supported by the Danish Arts Foundation.