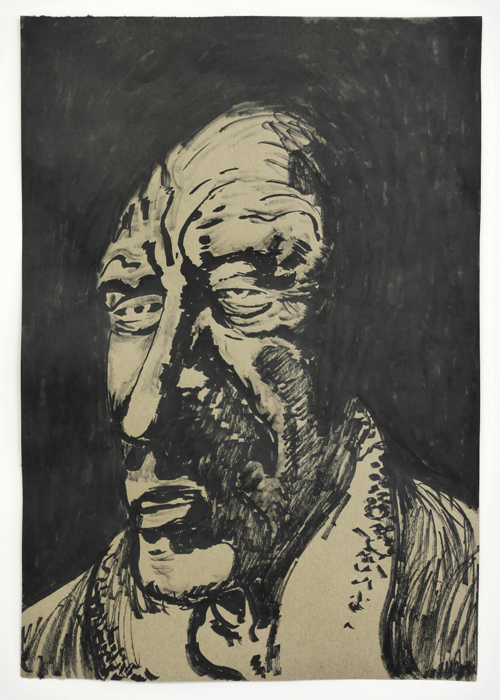 Treignac Projet is pleased to present new works on paper by Matt Bryans with selected pieces by his 10-year-old daughter, Vanya.

The exhibition signals a new departure for Byans, with a large series of imagined portraits. He confides that with this series he is returning to early inspirations, while preserving his recent works’ preoccupation with the facts of 20th and 21st Century turmoil and trauma embodied in endless global conflicts and the lives that inhabit them.

It might be tempting to see in the gazes of the portrayed men, the accusatory look of those who have paid too much for their lives, but Bryans is not only interested in proposing an under-history of the twenty first century. Bryans speaks of circularity, yes, of history repeating, but also of a circular cultural relationship in which trauma is reflected but also transforms and acts within. With this in mind these portraits, all of men of different ages, seem to waver between representing victims, perpetrators or witnesses. Their shadowy, ill drawn or deformed visages hover hauntingly between giving the impression of violence done to them, and a disfiguring that comes from within, from a burdensome secret.

While speaking of the development of the series, Bryans recalls a book in his possession that resonates strongly with these drawings. In 1945, at the end of the war, Phaidon press, London, publish Roman Portraits by L. Goldscheider & Schneider-Lengyel. It is a book of black & white photographs of the heads of statues from throughout the Roman period. The sculptures are startling in their naturalness, with a detail that defines them against Greek sculpture that tended to idealise the body over the individual. The book draws a line from this detailed portraiture to the older tradition of the wax death mask and ceremonial relations to ancestors and mourning.

For Goldschieder, writing his introduction to the book in in July 1940, these photographs promise access to the past through the Imagines of the ‘fathers of European culture’. (The Imagines, is a C3rd A.D. work by Philostratus and his grandson, explaining the meaning of artworks and addressed to the ten year old son of his host.) It is impossible to look through these photographs without imagining the biographies of real people long dead and the power they wielded. And to wonder at the publication of this book, interrupted as it was by the violence of the Second World War.

To this, Bryans also remarks that an early encounter with the drawn image was for him the British comic, 2000AD. Started in 1977, it reflected much of the anti-authoritarian attitude that was prevalent at that time, presenting its own post-apocalyptic, post-nuclear holocaust landscape reinvented in the wake of another war. But, as John Wagner, one of the comic’s founders remembers, the taste for anti-authoritarian figures was only matched by a strong attraction to authoritarian figures. Wagner combined these in the character Judge Dredd, who in the story line was authorised to instantly judge, sentence and execute criminals. For Bryans, comics like these offer a subversive agency for memory.

The strong presence of historic repetitions in these drawings is generational, and as such it is a two-way relation, back and forth through time. But what might have been a pessimistic, ever circling dynamic of iterated men-only trauma, is deflected by the inclusion of Vanya Bryans’ drawing in the exhibition. These offer a perspective upon the portraits, blurring personal and collective experience, and underlining an openness that escapes the destructive cycle of sacrifice á la Laius, Oedipus’s murderous father, and lead us to Oedipus’s daughter, Antigone.