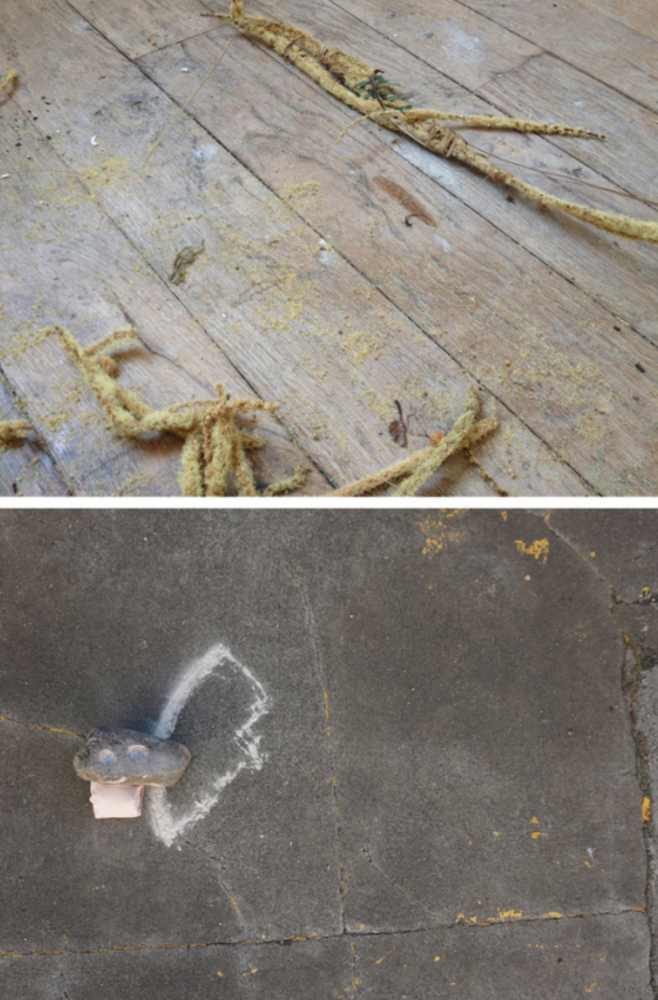 Localised Temporalities – Cutting Together-apart, focuses on understanding the possibilities of artistic practice to speculate and imagine new relations between and within place, time, materiality and nature-cultures. It challenges how differences and connections are produced between the categories of perception and reality, emphasizing meaning and differences as temporal and localized moments.

Sallamari Rantala & Laura Soisalon-Soininen worked on the site through bodily and material measuring and repetition, relating to the environment as a natural-cultural continuum. They engaged with the site and location through walking, playing and crafting elements found alongside the river and plateau.

In Treignac Sallamari’s practice is organized around locally self-developed, open-ended games. The works perform the “rules” of the games as well as their material players. Her practice challenges the concept of duration, as works seem to simultaneously occupy moments of time from prehistory to the contemporary situation.

Laura’s works can be experienced as material traces of embodied measurements and reciprocity with the river Vézère that flows through Treignac. Her works create speculative connections between local materiality, mathematical sentences and language.

The project Localised Temporalities – Cutting Together-apart, is a continuation of the curatorial and artistic project, Entangling Matter and Meaning. It looks into artistic work and its presentation within the framework of queer, quantum-physics theorist, Karen Barad. Based on her feminist and post-humanist philosophy of science, Barad claims that subject and object, or nature and culture, are not in interaction but intra-acting with each other. Differences and connections are in a process of constant emerging. Things are in relation to each other before they are cut ‘together-apart’, in localised material-discursive emerging. The Entangling Matter and Meaning project was started by curator Jussi Koitela and artists Jaana Laakkonen and Sam Basu in 2017. During 2017 it explored art, artistic practice, research and presentation, through the exhibition, Intra-Structures – Monsters of the Seven Lakes and the Entangling Matter and Meaning residencies & workshop. In 2018, the project continued with artistic commissions in Entanglements, Embodiments, Positions.