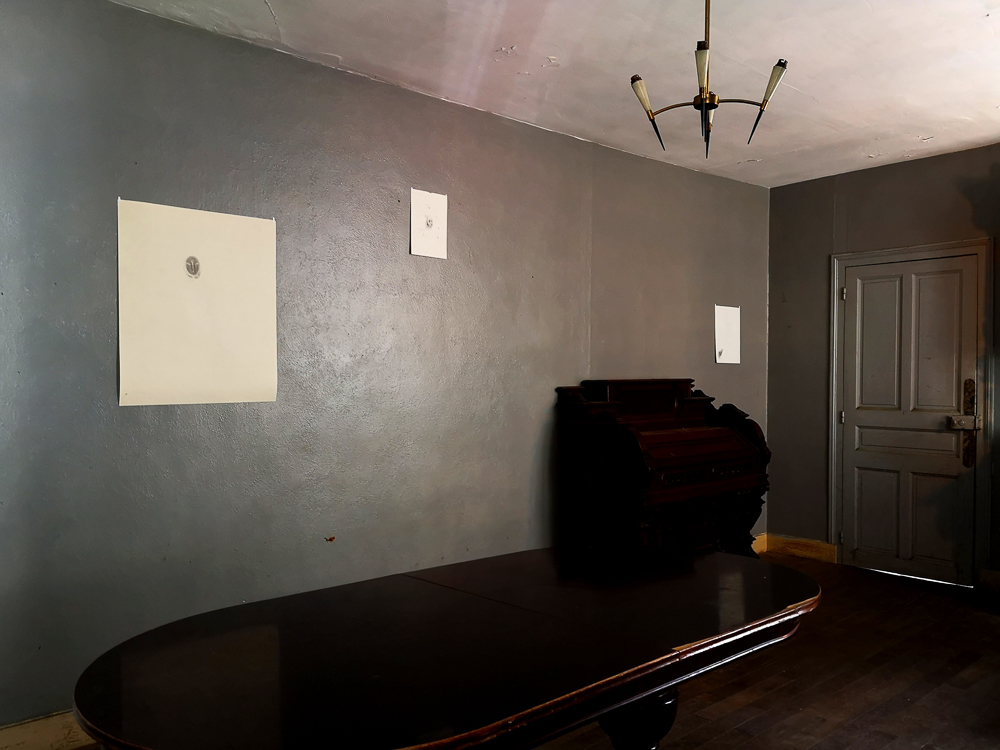 Thomas Helbig presents a new set of works on paper installed in the former hospice at Treignac Projet. The exhibition was developed by Thomas in relation to a receptiveness towards the space’s past and future occupancy.
Viewing by appointment

A room in the house has been emptied of all personal effects. Something has departed and we wait. Thomas Helbig’s drawing installation produces a quiet space of reversals and nonlinear time; a mirror has been taken off the wall and propped in the corner, a trouser-press sits close by looking like a miniature guillotine. A drawing of a hand stretches out towards the bellows-organ while the shadows of removed objects are evident in the dust on the sideboards. Cobwebs from behind removed paintings lace across the grey walls. And faces appear in blemishes on sheets of paper stuck to the wall.

This is a thin world of absorbed and persistent stains trapped out of time, like the limbo after a wake. It is a world of absence that reveals fellow absences buried in the stratified present. This is the world of the past of the hospice; its workers, its orphans, its sick and wounded, and of the hospice’s current users who are attempting to survive in a precarious art world. The installation draws out the hospice’s obliterated stories and spiritual logic, like blotting paper draws ink from writing, revealing marks that are illegible but structured and still curiously articulate.

The source material for his drawings Thomas often finds in the realm of digital images that are then reworked in his studio. They are collected from all types of picture, but are often sourced from historic paintings. Helbig is not interested in nostalgia or the hierarchical function of art history, but in the strange effects these images produce when encountered through internet searches, Pinterest and other themed collections; “there is a dreamlike quality to the history of Art”, according to Helbig, which is derived from the very contemporary context of the circulation of images. “A long time ago a friend said that a picture that does not appear on the internet does not exist. At that time I thought, that’s ridiculous, but there is an absurd truth about it since the world wide web claims a kind of totality of representation… paintings paradoxically disappear behind their digital simulation, like sunsets disappear behind postcards.”

With thanks to Cora Waschke